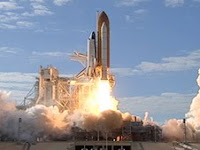 I've always been a big fan of the space shuttles and have always wanted to go to Florida not to see Disney World or Universal Studios but to watch a launch and tour the Space Center and see the original Apollo memorabilia. But since I live on the west coast this will probably never happen. 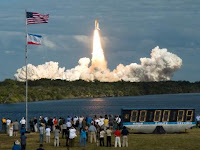 So the other day I was thrilled when I was reading my daily Google news bites and saw that the Shuttle Atlantis was going to launch in about 30 minutes. I quickly jumped onto the NASA site and launched the live video feed. Then as the count down started at T-minus 9 minutes I thought, "hey I have a high def LCD TV and I get the NASA channel on DirectTV?". So I sat and watched the launch live as it was happening on my TV Set. I got to see it take off and then drop its boosters and then reach orbit and drop the main fuel tank. Traveling at over 8000 mph at 67 miles high it begins its trip to join up with the space station. I had never watched a launch live before and it was pretty thrilling just thinking about how routine they make such a complex achievement take place.

Stuff to check out

Jeff
I was born in Northern California moved to Oregon in Jr High. Attended college in Eastern Washington. Got married and moved to Southern California. Moved back to Oregon and bought a house where we live today.